The Longboard Pumping Technique – What Is It and How Does It Come In Handy? 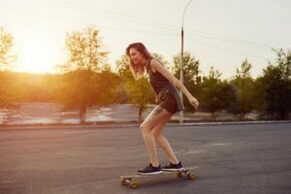 When riding a skateboard or a longboard, your main goal is usually to move forward and gain some momentum. There are two main methods you can use to get moving. The first is pushing or kicking and the second is pumping. Most people start with the pushing technique when learning how to ride longboards. This technique requires you to push in order to get the board moving. However, this isn’t the only way to get and keep your board moving.

There is also the option of kicking which entails pushing off the ground with your feet with the objective of getting the board moving. Both pushing and kicking are good ways to get moving on your longboard, but this article will solely focus on the pumping technique. You can read on to find out what the longboard pumping technique is and how it comes in handy when cruising on roads and sidewalks.

Pumping On A Longboard
Many people ask, what is pumping on a longboard? Well, pumping is when you use your body’s movements to keep the board moving forward without necessarily touching the ground with your feet. The pumping technique is achieved using a wide variety of movements, but the main focus is usually on shifting your body’s weight to create momentum for the board to move forward. Apart from your body’s weight, the pumping technique also makes use of your terrain to transition power throughout the board as opposed to slowing you down.

Why Learn The Pumping Technique?
So why should you invest some time and effort into learning the longboard pumping technique? Well, the main reason is that if you are successful at mastering this technique, you will require less energy to move forward when compared to the kicking and pushing techniques. The longboard pumping technique is therefore excellent for long distance rides. The other reason why you should consider learning this technique is that pumping is an excellent way to exercise your entire body. If you specifically ride as a means of workout, practicing the pumping technique will allow you to move your muscles more and thus have a more fulfilling workout experience.

The last and probably the most important reason why you should consider learning the longboard pumping technique is that it’s fun and extremely cool. You can tell how fun and cool this technique is by simply observing a skilled pumper riding on their board for miles on end without having to put their feet on their ground.

Stances
The pumping technique makes use of three major stances that facilitate optimal body control. The three stances include the surf stance, the parallel stance, and the running stance. 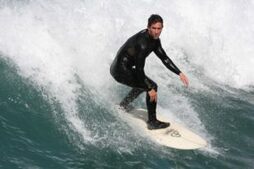 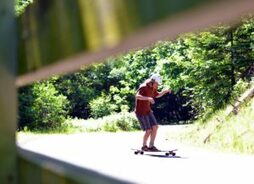 The next stance is the parallel stance which requires you to place your feet next to each, most commonly in the middle section of the board. You may place one foot slightly in front of or behind the other for stability, but not by much. This is another popular pumping stance that is pretty cool but requires a lot more balance to maneuver properly.

With the running stance, you have your feet spread apart facing forward while your body also faces forward. You can choose whichever foot you are most comfortable with to be the lead foot. The running stance is quite unique as it allows you to use your arms more when pumping.

With a little practice of the above stances, you will be doing the longboard pumping technique with ease in no time.